Paula and the little villages 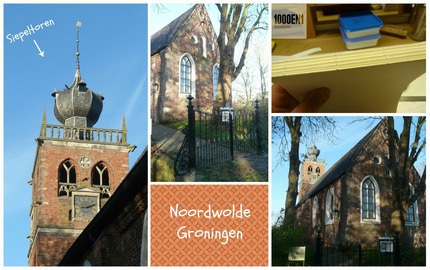 Yesterday I was on my way again to the North.
From Groningen I'd like to drive via Bedum, especially to avoid speed cameras but most of all to enjoy the beautiful scenery, narrow roads and large (cows) farms.
The tower of the church of Noordwolde attracted my attention before, but it was not easy to figure out how I could get there.
Until two weeks ago, the sun was shining so I decided it was a great opportunity to make some nice pictures of this beautiful church with siepeltoren. The only one in this province! The church of Noordwolde is absolutely one of the most beautiful churches in North Groningen.
And yesterday I paid a visit to Zuidwolde before my classes started in Warffum. Unfortunately it was drizzling and the pictures are so sad and dark that I decided not to include them in this collage.

In the morning I worked on a box I'm about to add to my portfolio early next year and in the afternoon I sewed cahiers for another new product. 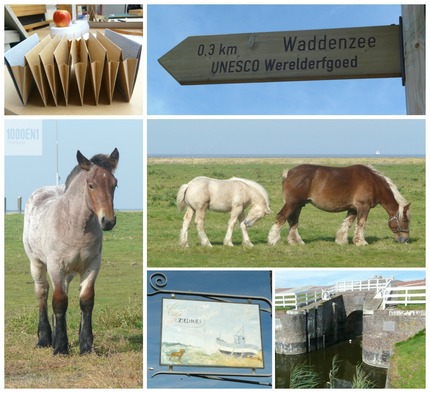 Today I was on the road again to the outpost of the northern part of the Netherlands, Warffum, to attend another lesson from
Cor Aerssens. While it was raining in the rest of the Netherlands,
it was beautiful weather over (t)here.
I had my lunch next to the sluice of Noordpolderzijl, the connection between the mainland and the Wadden. It was very quiet today, only some Wadden waders were having lunch in the nearby pub.
The only sound you could hear were birds singing their beautiful songs. I ate my sandwiches on the other site of the dike, on the Wad, next to several beautiful robust curious horses. And they deserve a special place in this blog post, after all today is also World Animal Day.

In the afternoon I worked on a folding structure developed by Hedi Kyle. Want to read more about my adventures in and around this outpost of the Netherlands?

Paula and the little villages 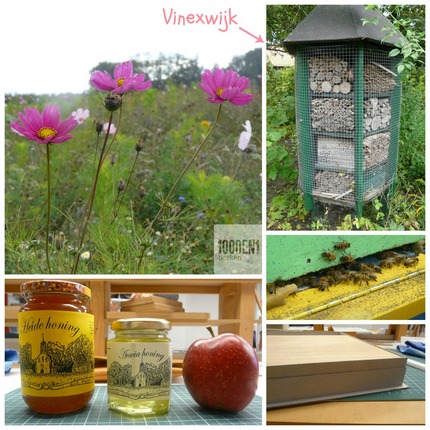 Last Friday I took up my classes again in the Northern part of the Netherlands. Normally on my way to class
I would stop in one of the villages between Groningen and Warffum, but I have been to almost all the villages on this route.
So from now on I will try to write a post about what I do on such a day at Cor Aerssens.

I worked hard on a new box, which was actually long overdue.
A box that might be included in the 1000en1boeken portfolio as a very nice new product. I'll get back to you on that later this year.
In my lunch break I like to walk around outside. Just to get some fresh air, preventing me from making too many mistakes in the afternoon.
At home, we ran out of honey for a while now and Sander & Guusje were already getting a little impatient ;-).
Lucky for them, there is a beekeeper in the street where Cor lives and where I have bought some rape honey before. So a supposedly short visit to the beekeeper turned into a long visit. This beekeeper is mainly engaged in breeding of purebred bees. At the moment, he had acacia honey and some very special heather honey from another beekeeper on sale.
And on top of it all I got a tour around the garden. Wowie!
There is a vinex district for the wild bees, beautiful hives in my favorite color blue, the buzzing sound of angry bees when a hive is opened, in short a very special visit in my lunch break.

Hopefully people are aware of how important bees are for us humans. Save the bee! 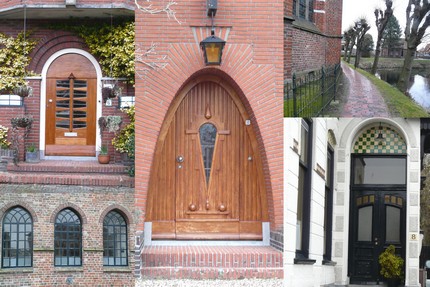 I'd like to leave early to avoid traffic jams on my way from Leiderdorp to Warffum (Groningen), to Cor Aerssens, the best (!) teacher ever for boxes and special book structures.
It usually means I have some spare time, so I'd like to visit the small villages around Warffum.

Leiderdorp – Warffum – Leiderdorp
And what is there to do in the car?
Of course listening to good music, but during car trips like this in the early morning I usually come up with great new ideas and creations. I love it! Part of my new collection was created during these trips.
Last week I received several interesting questions from wedding couples and a school. So, the ride to Warffum was an excellent opportunity to do some extra brainstorming. Made the time fly and gave me such joy.
This morning I passed the village of Middelstum. It is always a surprise if you do a short unprepared visit to a village in the upper North! Not distracted by the village's history you can see the most beautiful things. It's a very quiet village to begin with! I only encountered a road worker and a gentleman with a beautiful front door.
They actually have beautiful front doors over there in Middelstum ;-) and such a cute little path next to the church.
The door in the middle, you have to feel special to be able to enter and leave your house via such a beautiful door. Not this gentleman, he left via the side door. 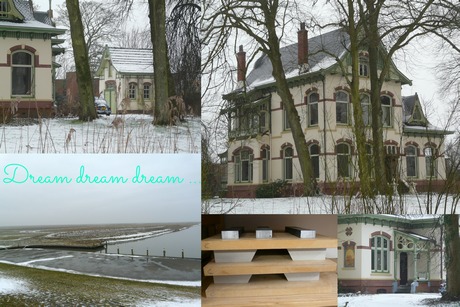 No churches and no windmills today!
After you pass Warffum you'll end up in a little village called Usquert. Just because I was very early this morning (speeding, but don't tell anyone), I was able to drive the extra 3 km to visit this lovely village. Only for 10 minutes, but still.

What a beautiful villas, wow, you just don't expect that in the upper north of Groningen. It's like Wassenaar but far more idyllic. No fences, no alarm systems around these houses. Nope, you can just walk right into the gardens.

You know that feeling when you instantly fall in love? It happened to me this morning. Those residents must have raised an eyebrow: “what is this lunatic doing at our house at 09.15?” It was me, dreaming about this house. You notice the barn in the garden? A little bit larger and I could have my perfect book bindery. Dream dream dream…

In class I started two new boxes and for lunch I drove to the Waddenzee, didn't see anyone there. 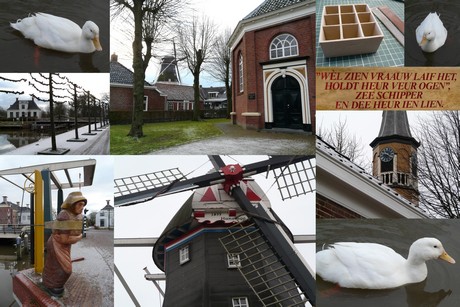 On my way to the Dutch earthquake area today! Talk of the town! Onderdendam was on my wishlist and it felt if I was on holiday for 10 minutes this morning.
Beautiful windmill, three ducks screaming out loud in the early morning and an interesting early meeting with the local journalist (complete with camera!). Apparently some hotshot was about to visit the town hall. Didn't see her, but there was a meeting about the renovation of the town hall. Don't think I missed much ;-)
Women are great! In the early days they had to tow the boat as well. I don't think I would last more than a meter. I really don't know what the saying means. Do you?

Worked on a little box with compartments today.
And on the way back my car was sandwashed five (!) times by gritters. Wondering if there are any women on the gritters these days? 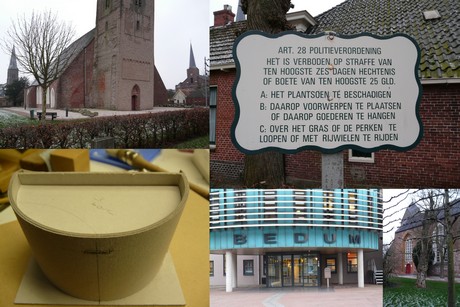 On my way to class this morning, my 10 minutes tourist stop brought me to the little village of Bedum, a fairly large village with 3 churches within a 100 meter radius.
My attention was drawn to the biggest church in this cold morning. My god, bbbrrrr, Eastern polar winds in Groningen really are cold!! Never before I saw a church tower off balance like this one. I have never been to Pisa, but I can imagine this one will hold up to that one! No struts or beams anywhere in sight. I hope they know what they're doing.
Just as remarkable was this funny sign in front of the church: 6 days in jail if you walk on the lawn. Talking about punishment! A bit strange compared to the 25 guilders you could also pay (although that most likely was a fortune in those days).

In between Bedum and Warffum I passed through the beautiful village Onderdendam, this is a good candidate for my next 10 minutes tourist stop.
During class I worked on a round-shaped box.
Have a nice weekend! 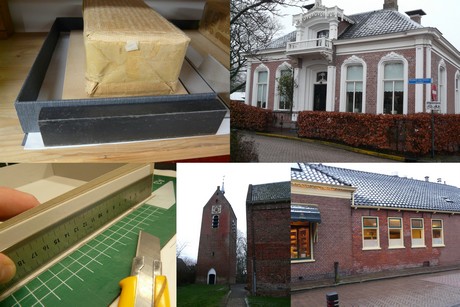 Around 09.15 I already arrived in Baflo, a friendly little village just before Warffum. And as almost every other village in Groningen, it has a lovely church with the church tower next to the church, funny!
It did snow a little and that gave the village a fairytale atmosphere. So many dreamhouses in this village! I would love to move one to Leiderdorp, including the studio in the garden of course!

Couldn't resist the bakery and bought a sugarloaf. And on my way back to the car I noticed the bakehouse behind the store. You don't see that in the Randstad anymore. It's lovely to do a 10minute early bird tour through all these little villages in Groningen. The way back is always less enjoyable, but with turning the music very loud you eventually get home :-)

My second clamshell case will be resting underneath some weight until mid January. For now, I'll have to finish the last orders for this year and if all goes well around mid January a lot of changes on my website!
Enjoy Christmas and I wish you all an especially creative 2013! 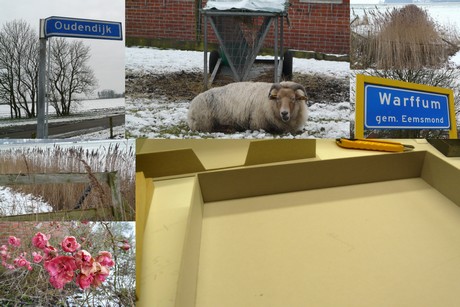 Today no time before class to picture a little village. Code Orange in the upper North, so I had to drive carefully (and slow) the last part. These days I will go outside at lunch time to get some fresh air. Otherwise I'll be making tooooo much mistakes in the afternoon. So today what you are seeing is in the neighborhood of Oudendijk in Warffum. Such a beautiful wide view, NL still has much free space. And it was freezing cold outside, -1 ℃. The sheep was probably laughing at me, wearing a scarf, gloves and hat. When I arrived back home in Leiderdorp, the temperature had risen to +9 ℃ (an incredible increase!) Stay tuned ;-) 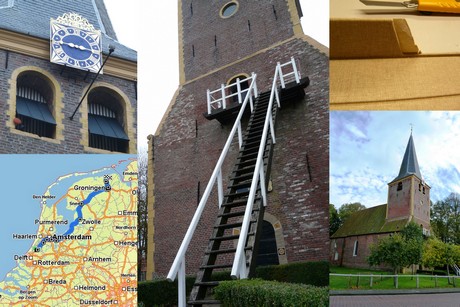 I'd like to leave early to avoid traffic jams on my way to Warffum, to Cor Aerssens, the best (!) teacher ever for boxes and special book structures. It usually means I have some spare time, so I'd like to visit the small villages around Warffum, this time Winsum at 09.15 in the morning. Winsum has a church called the Torenkerk which staircase is located on the outside.
Anyway, about my lesson today: in the upper right corner you can see a clamshell case in progress. Long day, worth any minute on the road!

Which Grunnegs village will be the next in three weeks time?