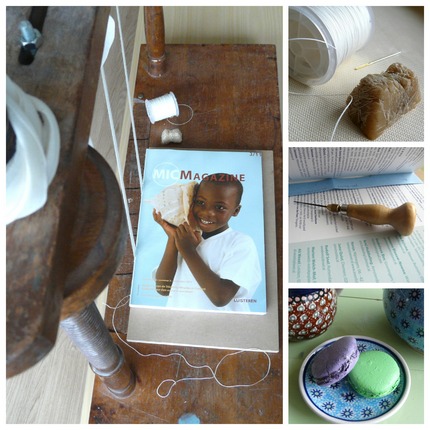 Last Saturday I had to deal with four volumes of magazines.
First, I removed a lot of staples with a knife. Next step was to make holes with the piercer so the magazines could be sewn on sewing tape. By the way, that strange little cube in the upper right is bee wax that is used to wax the thread.
To me, it is always nice to just sit quietly behind the sewing bench and sew a few volumes magazines, it's a nice interchange of work!
When I reached this magazine featuring this cute little boy with a shell it was time for a break.

My dear friend Rabia of www.lovelies.eu had brought a surprise package the evening before I went to Groningen.
Sander & Guusje were kind enough to leave 2 macarons for me ;-)! So during my break this weekend I had a real yummy moment!
I ♥ lavender macarons